There's a few different Physics systems provided by default in Phaser, each with their own uses cases, advantages and disadvantages. The three default physics systems are: 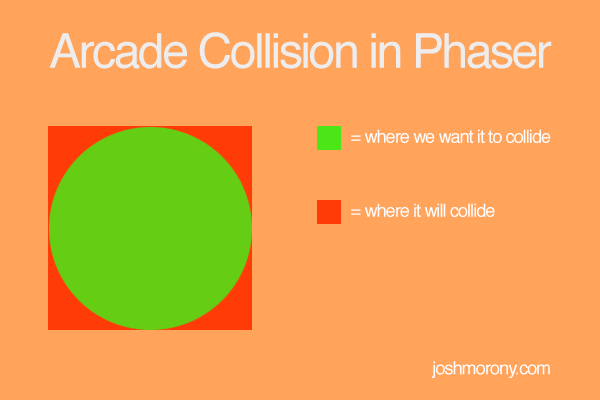 In a game this would mean that a collision could occur even if the circle is not colliding with anything. Circles are a bit of an unfortunate example, but in most cases this collision detection works well and will look fine.

P2 Physics is a much more complex and realistic physics system. Using P2 you could create things like springs, pendulums, motors and so on – the only real downside to using this system is that it's much more "expensive" and can put a strain on resources. Using P2 physics on a mobile device would not work as well as Arcade Or Ninja would.

In the rest of this tutorial we are going to look at how you can get Ninja Physics set up in your game (it's not quite as easy as you might think).

Before we get started, it's important to note that the Ninja Physics system is not actually included in Phaser by default anymore. It will be making a return in Phaser 3, but since it is not often used Richard decided to leave it out by default:

Ninja Physics is no longer included in the build files by default. Not enough people were using it, and not enough contributions were coming in to help polish it up, so we've saved the space and removed it. It's still available in the grunt build files if you require it, but we're deprecating it from the core library at this time. It will make a return in Phaser3 when we move to a modular class system.

Before you can do that you will need to make sure you have git and Node.js set up on your machine. Once you have those set up, or if you do already, you can follow the rest of these steps.

Run the following commands to install Grunt and the Grunt CLI

If you don't know what Grunt is, you can check out the website here. Essentially, it's a tool for running automated tasks.

Now if you go to the build/custom folder you should find a JavaScript file called phaser-ninja-physics.js.

Replace your phaser.js or phaser.min.js file in your Phaser project with the phaser-ninja-physics.js file you just created

and that's it! I'll be writing a tutorial very shortly that expands upon my Arcade Physics based running platformer tutorial to use the Ninja Physics system instead so keep an eye out for that!

UPDATE: The Ninja Physics Game Tutorial is out now.