I recently published a video that demonstrates why I think saying that Ionic applications are not native is inaccurate and confusing (even though it is perhaps the most common way to describe Ionic applications). I make the case for this by building a standard native application with Xcode/Swift and then adding Ionic to it:

This article is going to recap the same process of creating a native iOS application with Xcode and then getting an Ionic application running inside of it. I will also be expanding much more on my thoughts around this topic in this article. There are a few goals for this article:

But perhaps the key goal is to:

1. Create a new Project in Xcode

IMPORTANT: You should absolutely not build Ionic applications this way. Capacitor already does this, and it does a much better job. What we are doing is pretty much creating a really basic version of Capacitor. The point of us doing this manually is so that we can explicitly see what is happening, rather than Capacitor doing it automatically behind the scenes. 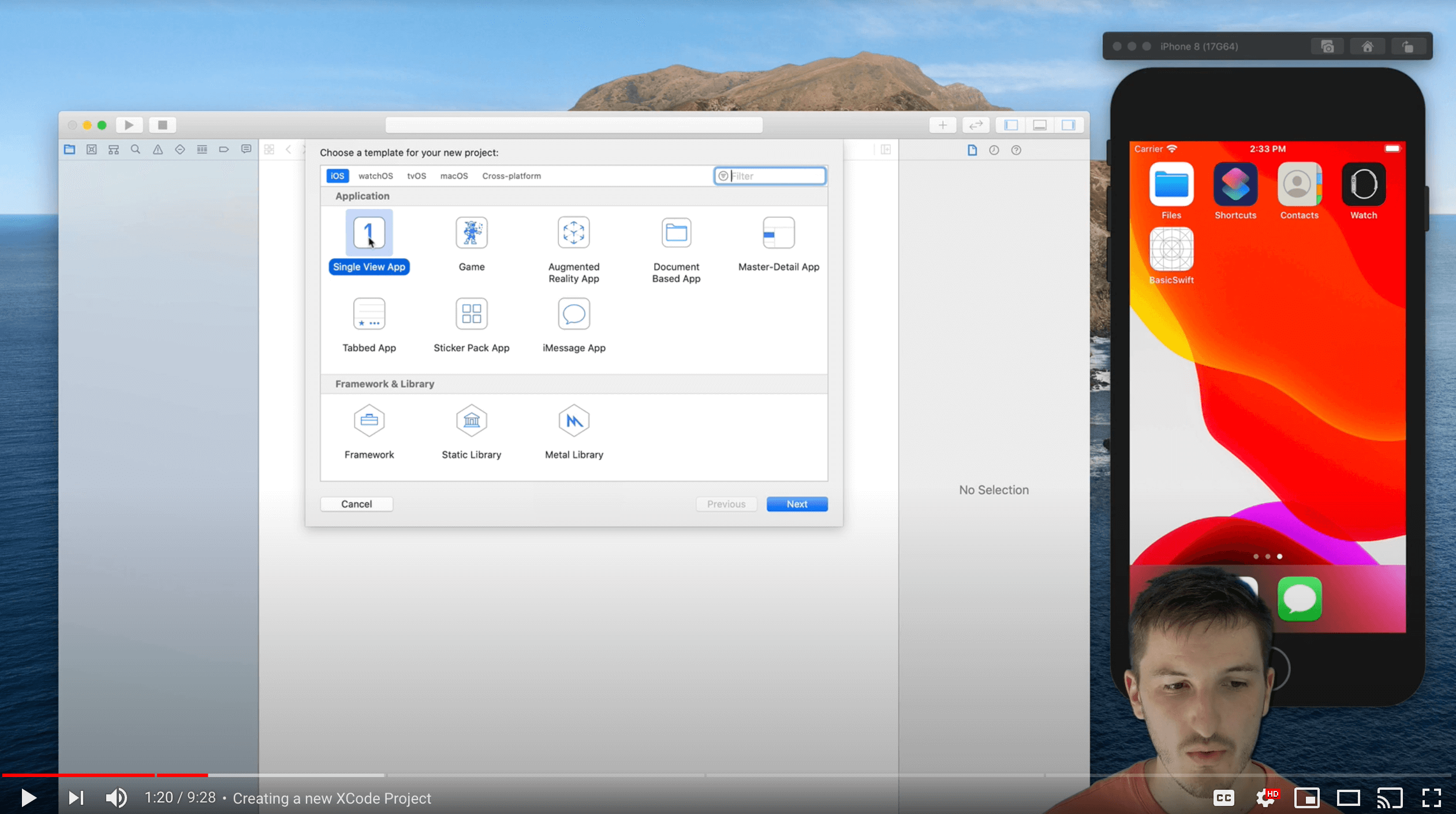 This imports WebKit and configures a new WKWebView which we then assign to the view. We have used the same basic configuration options that Capacitor uses when created the web view (allowFileAccessFromFileURLs is important here as it will allow the index.html file that we load in the web view to load the other JavaScript and CSS files it depends on).

4. Add a Built Ionic Application to the Xcode Project 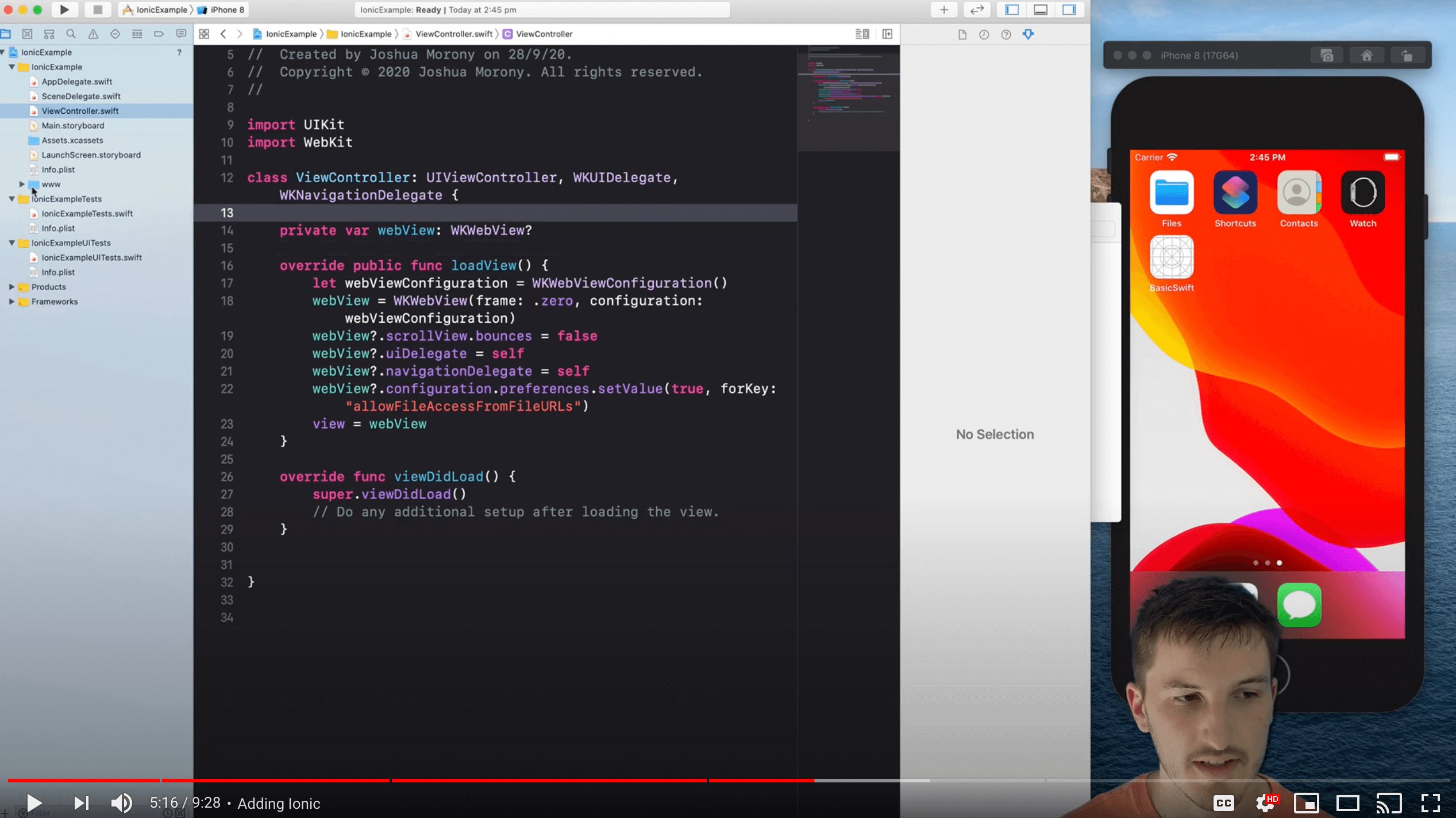 Although you would not typically do this in a standard Ionic/Capacitor application, you will also need to modify the index.html file inside of the www folder such that this line:

is changed to this:

If you do not do this, the JavaScript/CSS files will not load in correctly.

5. Load the Ionic code into the Web View

Now inside of the viewDidLoad hook we are creating a URL request for our index.html file inside of the www directory and then loading that into our web view. That's it! We now have Ionic running inside of our native application:

Why is this Ionic application not native?

At what point in this process did the native application I created suddenly become not native? When I added the web view? When I loaded an Ionic application into that web view?

The application we have built has access to everything any standard native application does (because it is just a native application). It can access any native feature it wants, including using additional native controls on top of the web view. The only condition here is that if we want to make use of data retrieved natively inside of our user interface (e.g. a photo from the camera or data from storage) we would need to communicate that data to the web view so that the Ionic code can make use of it (this is something that Capacitor allows us to do).

First, a WebKit View is one of the standard native user interface controls provided by iOS. But even if we exclude that, why would not making use of a specific subset of features that native applications offer suddenly make the application not native? When I first created the Xcode project, before I added the WebKit View, there were no native controls being used - was it not native at that point in time? We could drop other native controls on top of the Ionic application and make use of them (like modals, action sheets, alerts, and more), is there a certain number of native controls that need to be added? Why is usage of the user interface library the defining factor?

Some people will say that if it includes the WebKit View control it makes the application not native. This creates a very weird situation which where by adding a native control to your native application you make it less... "native". But if we do take that definition, then many "typical" native applications wouldn't be considered native, as many use web views to display at least parts of the user interface - I have not researched this myself to verify but I believe this includes big name applications like Instagram and Uber based on findings by others.

I realise I am being a bit silly here with my hypotheticals, and I don't mean to come across as inflammatory. I just want to highlight the kinds of weird/confusing/absurd situations we have to discuss if we use "native" as the descriptor to distinguish between various approaches. Where do you draw the line?

What SHOULD we call these applications?

I don't know. I'm just going to be the annoying person who points out issues without offering solutions. We do have the term "hybrid" for Ionic which is commonly used, which is better than simply labelling Ionic applications "not native", but I still think it is a vague and confusing definition.

If a client or a developer asks if Ionic is "native" the answer that would be useful and clarifying to them would depend on what exactly they mean. So saying Ionic is native and Ionic is not native here is misleading both ways.

I can offer a few thoughts on how I would describe the nature of Ionic and alternatives, without using a blanket native/not-native term. This is how I would differentiate between the approaches I've mentioned in this article:

Do these differences matter?

They might, but in a majority of cases the skills of the people building the applications are going to far outweigh any potential performance drawbacks of a particular approach.

There is this common perception that a "standard" native application will always outperform alternatives that have some level of abstraction going on inside (like Ionic and React Native). In theory this might be true, but the reality is very different. A standard native application might have more power available, but it is susceptible to the same coding/design flaws that any programming language is. I would take higher skilled developers building with Ionic over lesser skilled developers building standard native applications every day (even if we wipe out every other benefit of using Ionic like being able to share the exact same codebase over multiple platforms).

Try putting me in a V8 Supercar racing against Craig Lowndes in a stock standard Toyota Corolla. I don't need to know much about cars to know that I am going to lose that race every time, despite the extra power I might have access to. If all we are interested in is city driving, then the Supercar gives me little to no benefit (and will likely be a hindrance).

What are your thoughts?

Although I've been a bit cheeky in this article, I do genuinely want to hear from, and have a discussion, with people who disagree with my view here. I think the majority of people do disagree with the view I have outlined.