People may often be led to believe that something in their code or the Ionic framework is broken because they aren't getting the values they expect when in reality they are just attempting to access certain values before they have been set because it relies on some asynchronous method.

In this article, I am going to discuss the difference between asynchronous and synchronous code, and some common situations that you might run into in an Ionic application.

The Difference Between Synchronous and Asynchronous

Here's an illustration of what is happening behind the scenes: 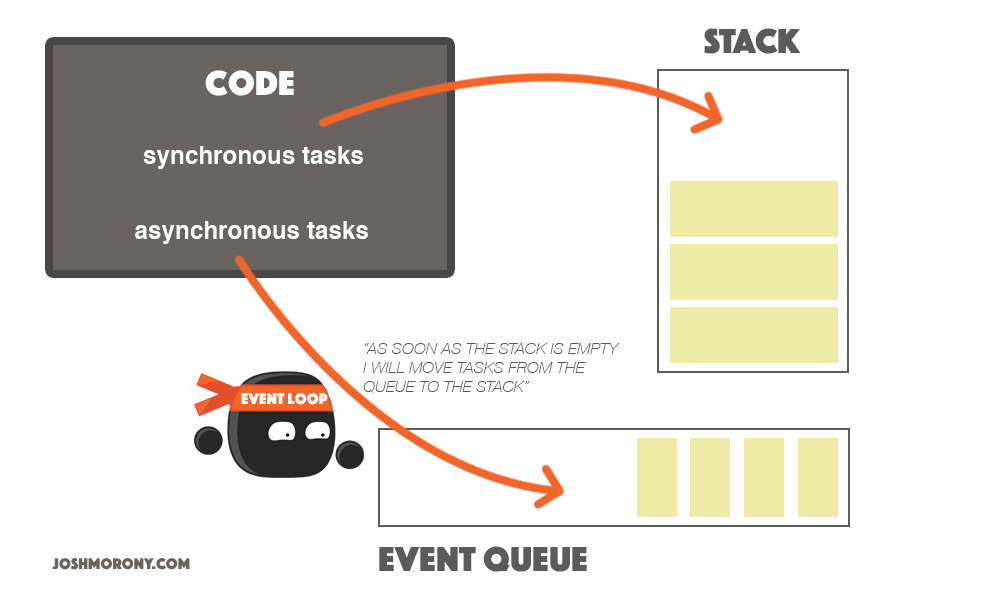 One of the first times people run into issues with asynchronous code is with the Ionic Storage service. When retrieving data from storage using the get method, an asynchronous request is made to load the data. Instead of returning the data directly, the get method will return a Promise that resolves with the data when the asynchronous task has completed.

When attempting to use this service, people may do something like this:

and expect that the username will be retrieved from storage and then logged out to the console. This won't work though. The username variable doesn't contain the value from storage, it contains the Promise that will eventually resolve with that data (and at this point in time, it will not have resolved yet).

Instead, you need to handle the promise like this:

This adds a handler for when the Promise that get returns resolves, and it will log the data that the promise resolves with to the console. This will work because the console.log statement is only triggered after the asynchronous task has completed.

However, this can lead to more confusion. Once people understand that they need to handle the response in this manner, they may try to do something like this:

So, even though there is some appropriate handling of the asynchronous function, we are still attempting to access it in a synchronous manner which will not work no matter how you structure it. In order for it to work, whatever it is that is making use of the result must be triggered from inside of the .then() handler.

You may also run into this situation with Observables, the concept is pretty much the same but it looks a little different. In this case, people run into trouble with observables initially when attempting to use the Http service.

Similarly to how people may mistake the 'Promise' itself for the data is resolves with, people often also confuse 'Observables' with the data that they emit. For example, people may do something like this:

Again, it looks reasonable enough but the get method is asynchronous and it will return an Observable, not the data that is being loaded in from the server. The correct way to handle an observable is like this:

The way in which this is handled is very similar to a promise, except that we subscribe to the Observable. There are a few more differences between Observables and Promises, but not much more you need to know in the context of this tutorial. If you are unfamiliar with Observables, I would recommend taking a look at An Introduction to Observables for Ionic.

As one final example, just like with Promises you can not do this:

I think the example of making HTTP requests is a little more obvious because it is somewhat intuitive to know that you are not going to instantly be able to access something that you are loading from a server. However, even code you execute completely locally can still be asynchronous and it may not be so obvious that the code is being executed later.

It is one of those concepts that can take a little while to 'click' but once it does it likely won't cause you many problems.