When it comes to building iOS applications on a Windows machine, it's not an easy process. It feels like Apple is fighting you every step of the way, but it is possible. In fact, when I first got into mobile development I did this for about 2 years.

An Ionic 2 application is built with web tech, so you can start building your application using a standard desktop browser on any operating system. In fact, you can just about finish an entire application without ever having to run it anywhere but through the browser. However, if you intend to submit your application to app stores then you will eventually need to create an iOS or Android specific build.

This is where Cordova comes in. It takes your web based code and wraps it up in a native wrapper, for whatever platform you are building for, and adds a web view for your application to run in. This native wrapper is in the same format as any other native application, which is why we are able to submit HTML5 mobile applications to native app stores.

In order to compile an iOS application using Cordova, you need the iOS SDK, which is only possible if you have a Mac and XCode. This is not an issue for Android because the Android SDK can be installed on both Windows and Mac. If you are not using a Mac, you simply can not create iOS builds (unless you are still able to use a Mac OS).

This is where services like PhoneGap Build and Ionic Package come in. These services allow you to build your application on their servers, which have the correct environment set up, instead of your computer which does not. You send the application you want to build into an iOS package to them, and they build it and send it back to you.

It sounds straightforward, and for the most part it is, but as I mentioned it will feel a little like Apple is fighting you every step of the way. Here's a quick summary of the difficulties of

If it's an option for you, I would highly recommend using a Mac if you are building iOS applications. If that's not an option, and you're happy to work through these difficulties, then read on!

We are going to start off by generating a new blank Ionic 2 application.

Run the following command to generate a new Ionic 2 application:

Once that has finished generating, you should make it your working directory.

We are just going to be building the blank application so we don't need to create any other pages or services.

We need to set up the Ionic Cloud platform services in order to use Ionic Package. Ionic Cloud is Ionic's paid platform that provides additional services for your application like push notifications – not to be confused with the framework itself which is free to use.

You will also need to make a minor modification to your code to set up the cloud services.

IMPORTANT: You will need to update APP_ID in the example above to reflect the APP_ID for your own application. You can find this by logging in at ionic.io.

In order to build for both iOS and Android, you will need to create a security profile. This profile will contain the necessary information to sign your applications.

For iOS you will require a .p12 file which is generated from a certificate assigned to you by Apple, and a .mobileprovision file which is a provisioning profile that specifies what kind of application you are creating and where it is allowed to run. For Android, you will just need to create a single keystore file.

Ionic have a great guide available for generating the necessary files (on both Mac and Windows) here: Security Profiles.

Once you have created the necessary files, you will need to upload them to your account.

Add a security profile by going to Settings > Certificates > New Security Profile in your ionic.io account

Make note of the TAG entry here, this is what we will use to reference this security profile when running the ionic package command later.

IMPORTANT: Make sure not to lose your credentials for the profile. If you lose the .keystore file for Android, or forget the password, it's game over. You can not retrieve or reset it in any way and you will not be able to update your application.

4. Use the Ionic Package Command

Now we are ready to generate a build using the Ionic Package service, and it's quite easy to do. We just need to use the following format:

where PLATFORM_TAG is either ios or android and where PROFILE_TAG is the TAG for the security profile you generated earlier. If you want to generate a production application that is ready for app store submission, you can add the --release flag:

So, to build an iOS application I would do something like this: 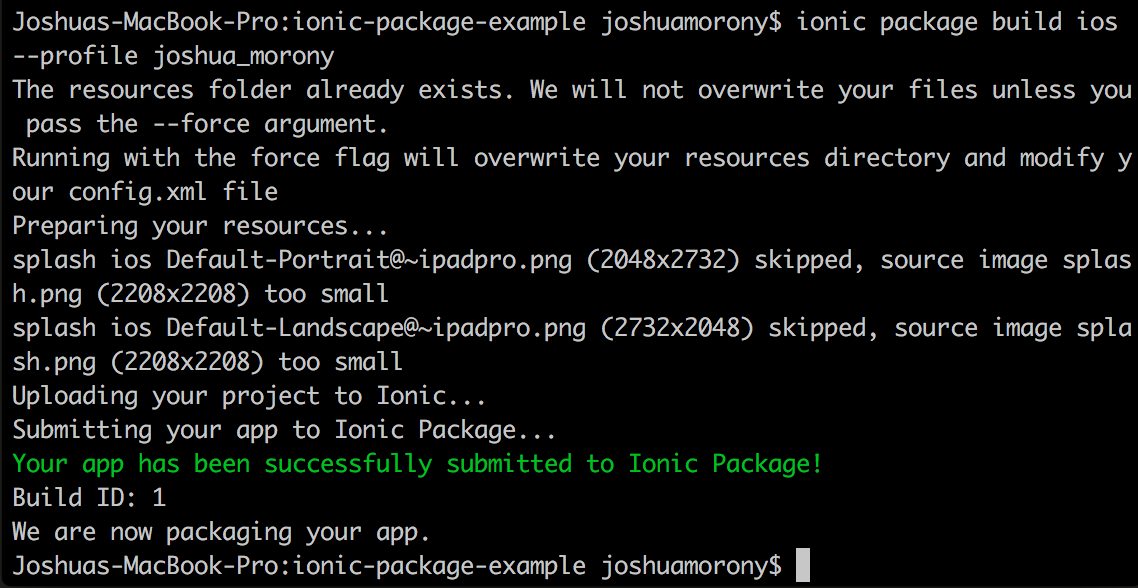 IMPORTANT: Make sure all of your Cordova plugins have been installed with the --save flag, such that they are listed in your package.json file. If the plugins are not listed in package.json then the Ionic Package service will not include them.

You can see the status of any of your builds by running the following command:

and if a build fails, you can get more detailed information on why with the following command:

where BUILD_ID is the id listed in the list command. Generally, errors you receive will be because of an incorrectly configured security profile.

Once everything has worked, you can download the resulting application with the following command:

In order to install & debug iOS applications using a Windows machine, you can use this great cross platform debugging tool called GapDebug. It allows for drag and drop installing via USB, and it provides a browser debugging interface which is very similar to using a Safari browser for USB debugging (as you would do when using a Mac). You can also use GapDebug for Android applications.

Building iOS applications on a Windows machine is not without its difficulties, but the Ionic Package service makes it as easy as it can be. PhoneGap Build is also a great service, but Ionic Package definitely has the advantage given its tight integration with Ionic – there's a little more set up required for PhoneGap Build.