A little while ago I created a tutorial that discussed how to theme an Ionic 2 application. It covered most of the basics like making use of attributes like primary and secondary, overriding SASS variables, and creating your own custom styles.

In this tutorial we are going to cover one specific component, which is the cornerstone for building complex layouts in Ionic 2: The Grid (queue Tron music).

Sometimes when creating simple layouts we can just add the components we need to the template, and everything sits nicely where it should. A simple list layout like this for example: 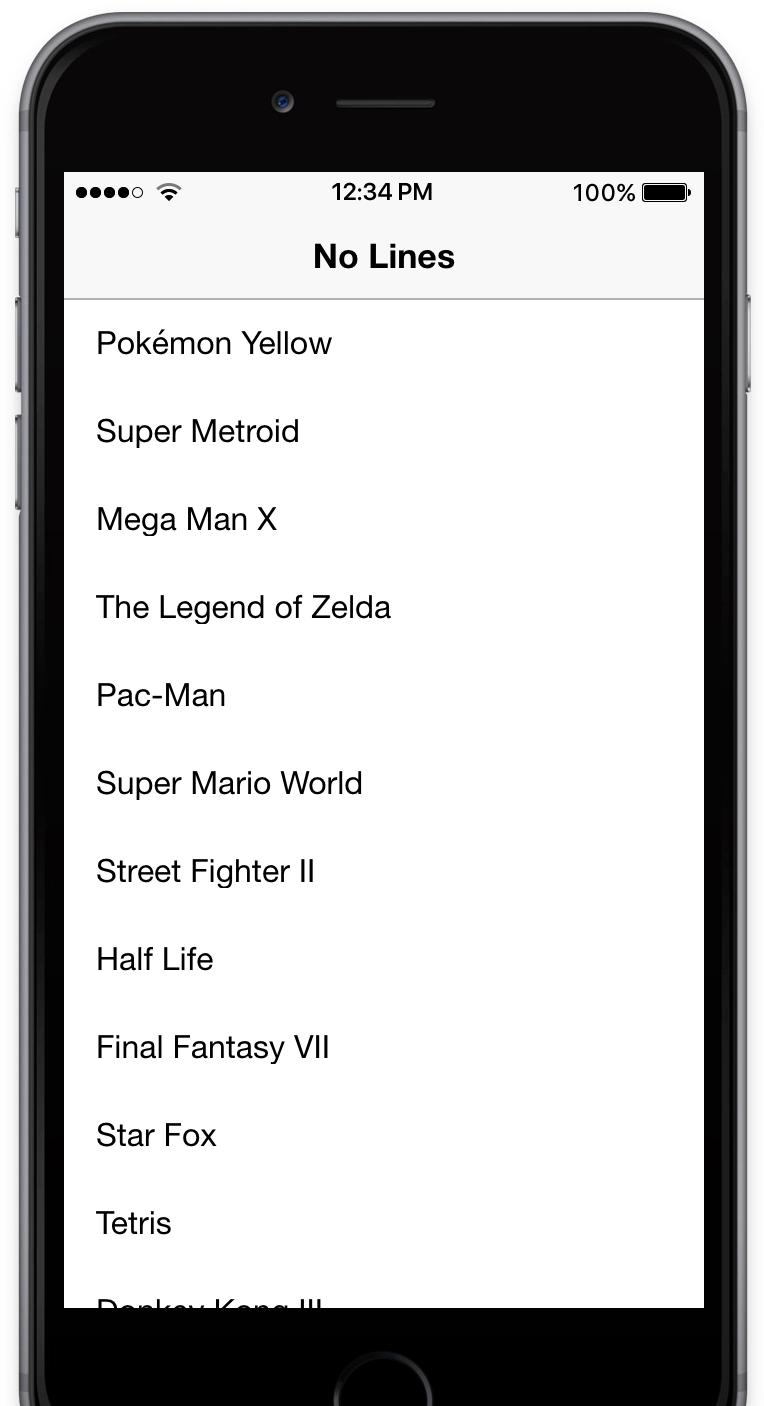 doesn't require any special styling. You just add an <ion-list> to the content area and the job is done. But if we wanted to create a more complex layout, like Twitter's profile page: 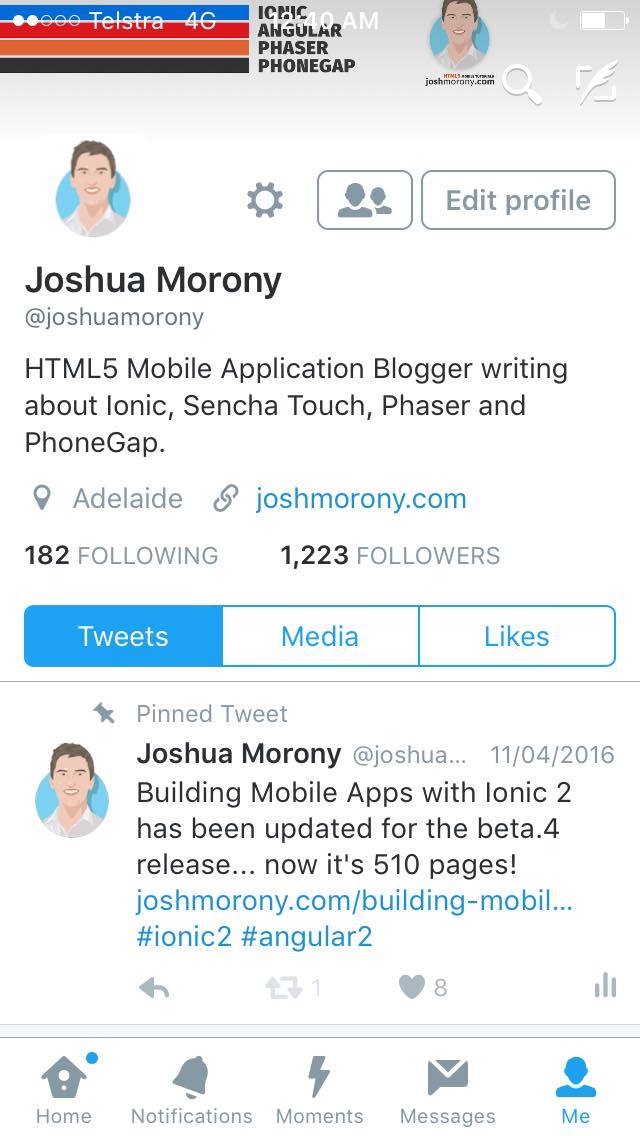 then we're going to need to do a little more work – fortunately the grid makes it pretty easy. It might be a little tricky to grasp at first, but once you understand how to make a couple simple layouts with the grid, you'll be able to create just about anything.

If you've used a CSS framework like Foundation or Bootstrap before then you will probably be familiar with using a grid layout by dividing your page into rows and columns. Rows display underneath each other vertically, and columns split up rows horizontally. The grid system in Ionic 2 works the same way.

Here's an example of how the Twitter page I just showed you would be split up into rows and columns: 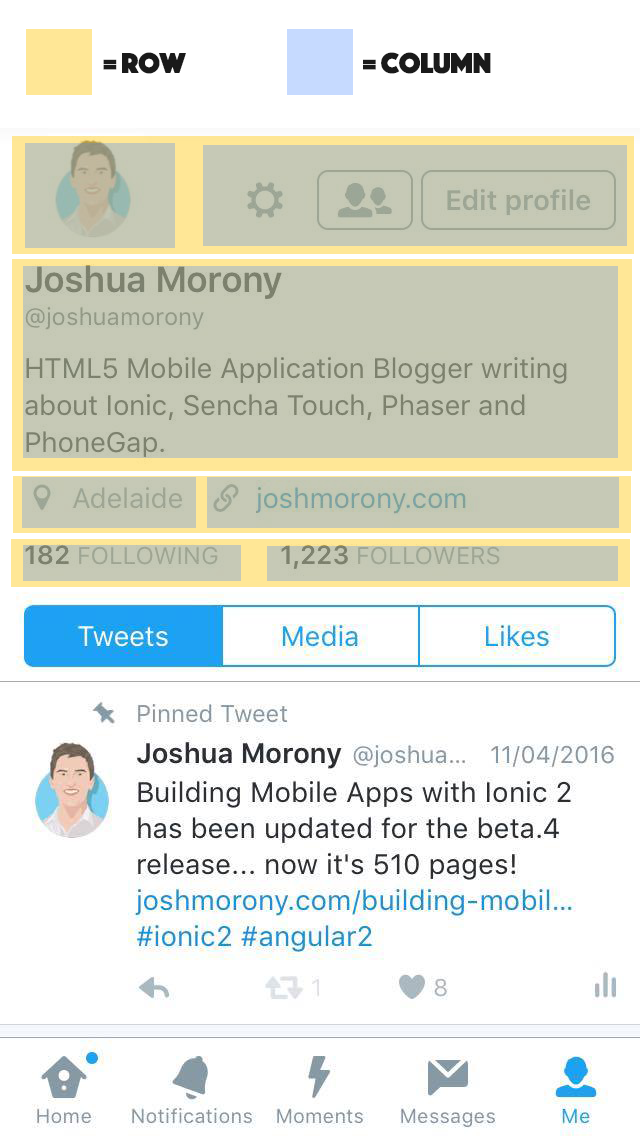 That level of complexity is pretty absurd though, I just did it to illustrate a point. You're unlikely to ever need more than one level of nesting.

By default, each column that is inside of a row will occupy an equal amount of space. If I have two columns inside a row then both of those columns will take up half of the row each. This isn't always what we want though, and in the case of the Twitter example above, we would want the users display picture to take up less space than the buttons to the right.

To handle these situations we can specify a col to any of our columns like this:

Now that we've covered the basics, let's go over a real example of implementing a complex layout with the grid. We will use the Twitter profile page I showed above as an example, which we have already divided up into rows and columns:

We have 4 rows. The first, third and fourth rows are divided up into two columns, and the second row just has a single full width column. Here's how the code might look for this:

All that we have done is replicate the row and column structure using <ion-row> and <ion-col> in the template, and for the columns that do not take up the full width we have supplied the col-* attribute.

The result will be something like this in Ionic 2: 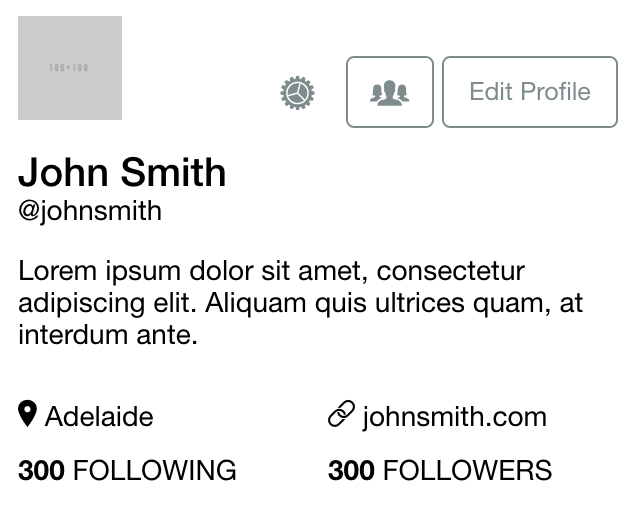 Notice that in the CSS we are using a weird attribute to align the button container to the bottom of its parent:

This is a flex property. The grid system uses Flexbox, which I have written about before. I'm not going to dive into Flexbox in this tutorial because it is a pretty big topic, but essentially you can use flex to position elements on the screen. It is much more powerful than traditional methods of positioning, especially when working with fluid screen sizes. For a little bit more background, read my previous tutorial for Ionic 1.

Using Flexbox with the Grid

I said I wasn't going to get into Flex in this tutorial, but there is one thing in particular I want to quickly cover. When creating a layout in Ionic 2 with the grid system, Flex can come in really handy. Let's say I want to create a page that is split into three equal sections vertically like this: 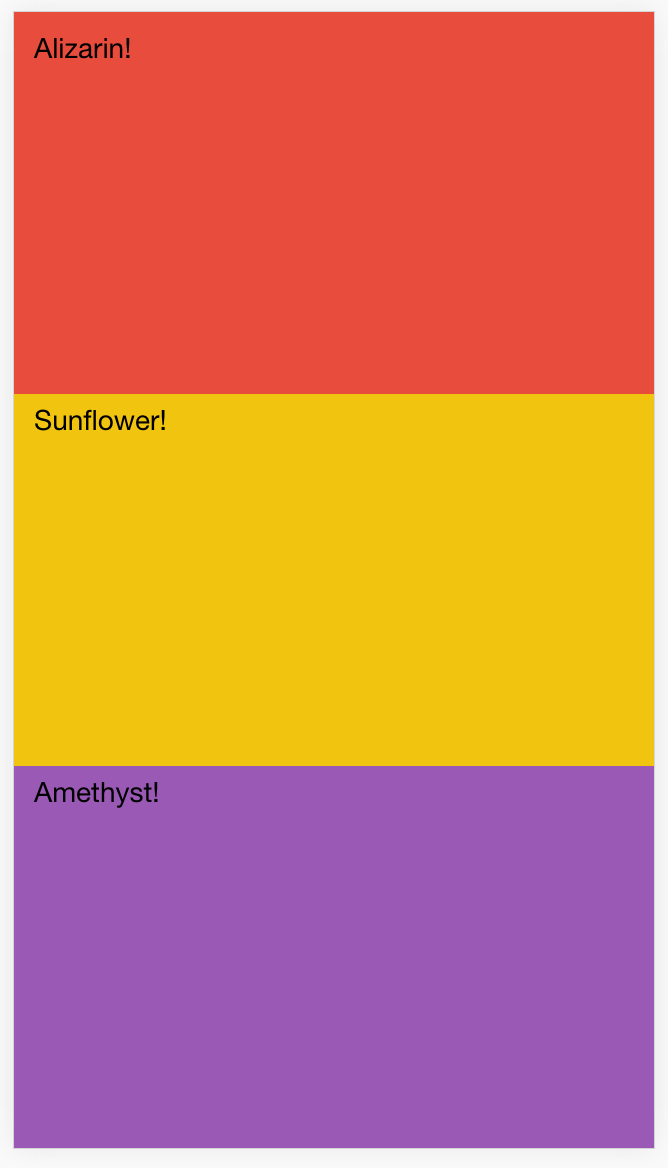 Seems easy enough, you would think you could just do something like this:

but the result would be this: 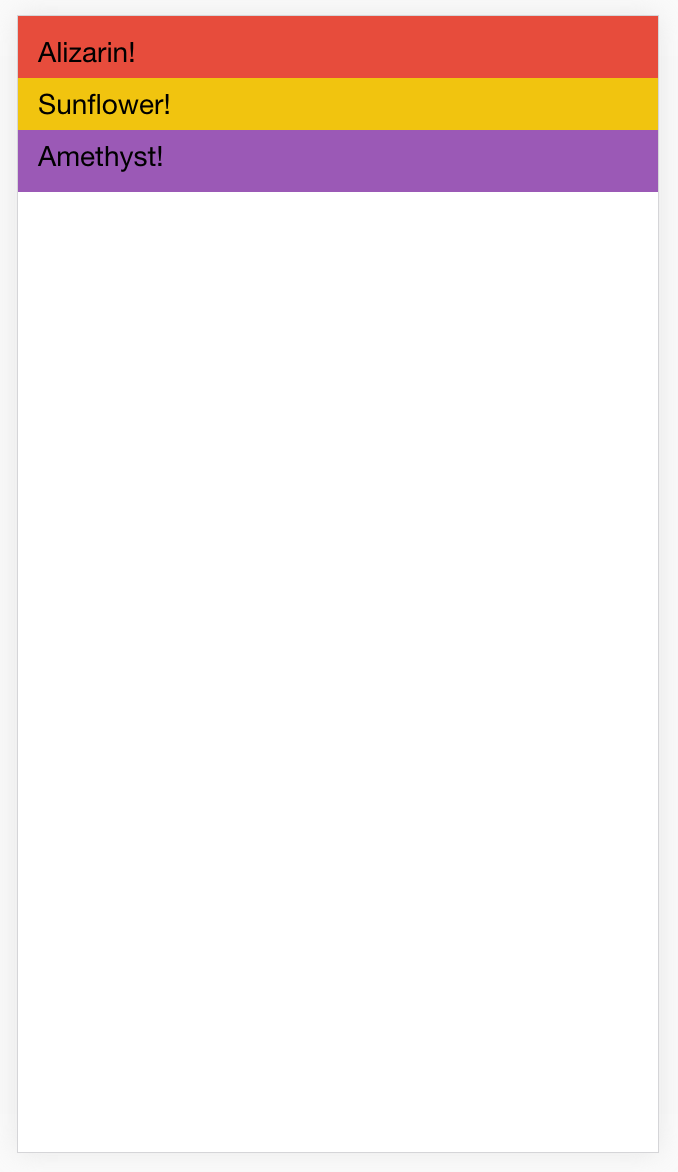 So if we add the following CSS to this template:

We will now get the following result:

which is exactly what we wanted.

Once you understand how to split up a layout into rows and columns, you should pretty easily be able to create the basic structure of just about any layout you can think of in Ionic 2 using the grid system. Combine that with the powerful options Flexbox offers to finish things off and you will be making beautiful applications in no time.